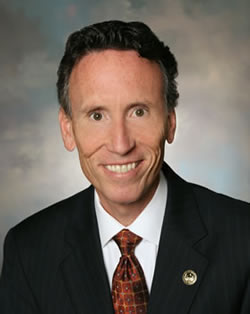 Mr. Anthony was born and raised in Shelby and a graduate of Shelby High School.  An architect and managing principal of the local architectural firm, Boomerang Design-MBAJ Architecture, Stan received his Bachelor of Arts in Architecture from the University of North Carolina at Charlotte and his Master of Architecture degree from the Georgia Institute of Technology in Atlanta, Georgia.  He is a member of the American Institute of Architects, National Council of Architectural Registration Boards, and a licensed Architect in North Carolina, South Carolina, and West Virginia. Stan is a lifelong member of Central United Methodist Church where he is active in the music ministries.  He and his wife, Ann, have two sons, Ollie and Perry.

DUTIES OF THE MAYOR:

The significant powers held by a mayor in North Carolina are created by individual city charters, by action of the city council, or by the mayor’s own political stature, but with limited authority.  North Carolina statute recognizes the mayor as the official head of the city for purposes of serving civil process, and most federal agencies extend this same recognition for purposes of official correspondence or actions such as grant awards or enforcement of federal laws and regulations.  North Carolina statutes require the mayor to preside at council meetings and give the mayor the power to call special meetings of the council.  The Mayor of Shelby, in all cases of a tie vote of the Council members present, upon any question or in the election of any officer by said City Council, shall have the right to vote, but shall not be allowed to vote in any other case.

The mayor as facilitative leader: