The City of Shelby owns and operates three cemeteries; Sunset, Webb and Eastside. Each cemetery is maintained by the Parks and Recreation Department. 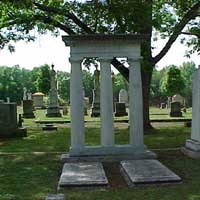 Sunset Cemetery
Organized in 1841, Sunset Cemetery has remained Shelby's most popular burial ground for over 160 years. The oldest section of the cemetery is the northwest quadrant of the "old section". Located here are numerous examples of mid-to-late nineteenth century funerary art including grave boxes, beautiful marble angels, tall obelisks, and family plots surrounded by ornate wrought iron fences. The visitor will also note the narrow tree lined lanes designed for carriages that add to the cemetery's charm. Sunset Cemetery is the final resting place for several noteworthy individuals of both statewide and national significance. Figures of national prominance interred here include W.J. Cash (1900-1941), author of the pivotal work, "Mind of the South" which argued that in spite of the tumultuous and catastrophic events that have bombarded the South, the traditional mindset of the southerner has remained unchanged. In what is perhaps one of the great ironies of Southern History, buried not more than 50 yards away is Thomas Dixon, Jr. (1864-1946), author of "The Clansman" and "The Leopard's Spots", from which emerged the highly contoversial film "Birth of a Nation." Figures of limited statewide significance interred here include Plato Durham (1840-1875), a Confederate veteran and prominent Southern leader during the Reconstruction era; Clyde Hoey (1877-1954), who served as Governor of North Carolina from 1937-1941 and in later years, was a United States Senator; and O. Max Gardner, fromer Governor of North Carolina from 1928-1932 and Ambassador to Great Britain (he died before going overseas in 1947)

To receive a copy of the cemetery ordinances come to the City Park office at 850 W. Sumter Street or

Click here to view all City Ordinances including cemeteries online.