On May 25, 1979 four Shelby firefighters and a city gas utility worker were killed in the line of duty during a fire in Uptown Shelby on West Warren Street.  The fire originated in a storefront business, spread throughout the row of tenant spaces and threatened to consume the entire city block.  Firefighters from Shelby and surrounding communities converged to contain the blaze and prevent it from spreading to neighboring structures.  During the firefight an explosion inside triggered a massive collapse of the building killing the five, and injuring twelve other firefighters.  Additionally, fifty civilians that had gathered at the scene of the fire were injured.  Killed in the line of duty were: Lt George Magness, FF Nathan Hall, FF Donald "Gene" Melton, FF Floyd " Nick" Sharts, and city gas worker Max Bowling.  In addition to the tragic loss of life, two city fire apparatus were destroyed, and the uptown sustained over five million dollars in property damage.  At the time, the fire was the largest single event line of duty death of firefighters in North Carolina.  It was later determined that the fire was arson.  Each year, the community gathers at the Charles Road Memorial Firehouse to pay honor to the fallen. 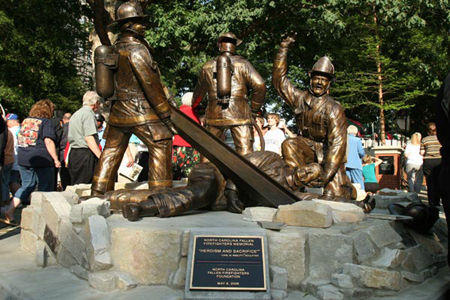